Graham Dunn has been a milkman since 1985 when he started in Bradford, and has 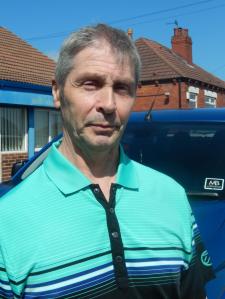 been working in Bramley and Pudsey since 1991. At that time there were 13 milkmen in this area, but now he is one of just three! Graham is pleased that there’s now a bit of a resurgence in milk deliveries, particularly as people become more conscious of and concerned about the amount of plastics polluting the environment.

Graham enjoys meeting and getting to know people he delivers to, and has seen new generations growing up in the same houses and neighbourhoods. Of his 400 customers about 65% are older people. He is always happy to chat with people, especially those who may not get out much and has often done odd jobs, such

as changing light bulbs, for older customers. He knows how important milk delivery is, especially for people who can’t get out, or struggle to carry heavy things. Graham also looks out for people, and has sometimes phoned the police when he has been worried about someone who has not picked up their pint from the doorstep. The worst thing about the job is that, working from around midnight to 6.15 am, he is sometimes out and about at the same time as burglars, and was once chased by a man wielding a knife!

Graham grew up in Thornbury and now lives about 700 yards from his childhood home! When he’s not working he likes playing golf, at Fulneck, where he also helps out and does odd jobs, including building bunkers.

If you would like to get milk delivered to your door, even if it’s just a pint a week, please phone Graham on 0794 654 9670. Or find your local milkman, online, wherever you are.