Tracy has been Chief Exec at Bramley Baths since December 2014, and it’s the best job 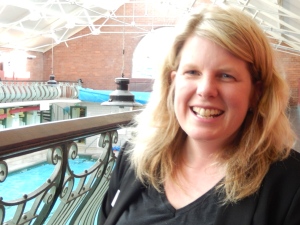 She particularly likes how varied the role is, meeting people and getting to know the regulars – it’s very rewarding to be doing something that so good for local people in the community. There’s also something very special for her about the beautiful Victorian building, although opening it up at 6.30am in pitch darkness in the middle of Winter is another matter!

Tracy, who grew up in Southampton, has lived in Leeds for more than 10 years, and intends to stay here. She trained as a chartered accountant and worked in finances in health and fitness chains for 10 years. After involvement in Heart (Headingley Enterprise & Arts Centre) she knew she wanted to work in something more community-based, which led her to the Baths.

Tracy is very aware of the benefits of the Baths for everyone in the community, including older people. She knows how people’s routines can fall away after retirement. Coming to the Baths is a brilliant way for people to meet people, maintain their fitness and feel good. It’s also particularly therapeutic for many disabled people, as the water supports bodyweight so well. The Baths also hosts a weekly Zumba Gold session, which, with its 60s and 70s music and slower pace, is very popular with older people who, Tracy says, all come out ‘feeling fantastic’.

Tracy is very encouraging to anyone who wants to visit the Baths. She promises they will 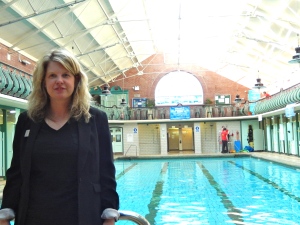 be welcomed, and can have a chat about what they might like to do, even before they try anything. As she says ‘We aim to be the friendliest baths in the UK!’

The Baths have been run by a board of trustees, for the benefit of the community, since January 2013. As well as the day to day management, Tracy spends time developing partnerships with local organisations (such as Bramley Elderly Action) and doing her very best to ensure the Baths are sustainable. She is setting up regular family sessions with members of Leeds Downs Syndrome Society. The Baths are very well used. They currently hold weekly swimming lessons for 13 schools, and private evening swimming classes for 700 children a week!

When she’s not working, Tracy spends time with her family: Angelo, Oli and their dog Fluffy Whitebones