I started working for BEA in November 2017. I drive the minibus, primarily in the OWLS area, as well as overseeing the maintenance of the buses and doing some transport related admin across the whole organisation. 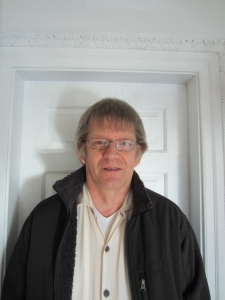 I worked in the transport industry for over twenty years, mostly as an HGV driver. I also worked for a time in France, backpacked down the east coast of Australia, and delivered humanitarian aid to the Ukraine.

In the early 2000s I educated myself in computers for a change of career and gained a Certificate to Teach in The Lifelong Learning Sector. I’ve worked, paid or voluntary, in the voluntary and community sector since 2006, teaching computers to adults, particularly older people. I also helped people research their family history. I am an Associate Member of AGRA (Association of Genealogists and Researchers in Archives), and an Associate Member of the British Computer Society.

I used to play violin in in an orchestra and  learnt piano and guitar. I was in a rock band In the late 70s, but no longer have the hair to prove it. I still play guitar. I used to play a lot of sport and also spent four years learning Italian at night school

I was born in Hunslet and lived in South Leeds for almost 50 years, but am now settled in West Leeds.