Two moving ceremonies at Bramley War Memorial brought the local community together, to mark the 100th anniversary of the start of the Battle of the Somme, on Friday 1st July.

The day began with an Act of Remembrance at 7.30am, the exact time the battle began 100 years ago. The Reveille was sounded by bugler Sally Clark, who also ended proceedings poignantly with the Last Post.

A longer Service of Remembrance took place from 10.45am, again with a bugle sounding. 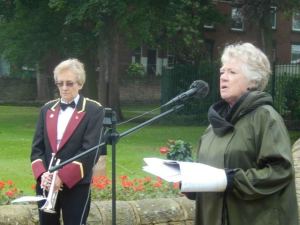 included those from Cllr Caroline Gruen, Norah Gibson and the Reverend Paul Crabb.

Both sessions were extremely well attended. The audience included war veterans and families, of all generations, of those who died. Many Bramley Elderly Action members were present.

A total of 77 people from Bramley, Stanningley and Rodley died at the Somme. The battle lasted until November 2016.

People with family members who died at the Somme were invited to lay individual crosses at the memorial.

Several shops in the parade opposite the memorial had window displays about the occasion.

The event was organised by the Friends of a War Memorial for Bramley.