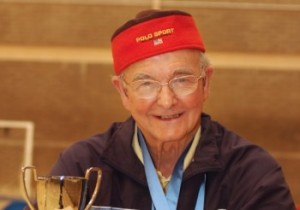 Les D’Arcy was a veteran table tennis player, who was featured in the film Ping Pong. He happily agreed to appear and speak at an OWLs showing of the film, at the Hyde Park Picture House, in October 2012. He spoke about his experience, recited poems and coached people in their table tennis skills. He was inspirational to older people, and to everyone who was lucky enough to be there to meet him.

Ping Pong followed eight people from across the globe as they competed in the over 80s category of the World Table Tennis Championships in Inner Mongolia. Les also took up athletics, at the age of 84, and went on to compete at world level. He also competed in triathlons and weight lifting, and was an Olympic torch bearer.

He firmly believed that people could do whatever they wanted if they put their mind to it, and should not be limited by age.